For amplified flute and tape 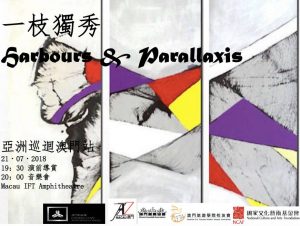 “time art studio” has been dedicated to performing bold and innovative contemporary music. In the second half of the 2018th anniversary of the celebration, we will combine two flute with electronic music, and for the first time in collaboration with the “Amsterdam founding organization” (Co-composers Amsterdam) from 9 The Country, the lineup of a total of 11 writers, brings together the Asian tour of harbours & Parallaxis for everyone.

[the] Series Nine [Harbours], specifically commissioned ” Amsterdam founding organization ” (Co-composers Amsterdam) for the theme of ” Port and for the idea of a ” distance culture exchange ” to create brand new flute With Electronic Music Solo business.

Port, is a port of port from different geographic cultures, which has not been replaced for hundred years. A Port, which has been able to gather a variety of cultures, to docking the cultural shocks and fusion generated by a number of small and small ports around the world, will be presented through music in this song.

The the a (Co-composers Amsterdam) is composed of a group of composers from all over the world, located in Amsterdam. The Organization’s composers are dedicated to research on a brand new ” offices ” Creation Model: different from the traditional model of composer’s independent creation,” every business of the the a is different. Composer-LED, co-ordination with composer members from all over the world, working together to complete a pluralistic art creation.” the ” the a ” program covers concerts, theatre, recording, film and documentary, etc. And reached the creative and possibility that traditional composers can’t touch.

The ” the a ” General Trick – Dutch Composer André Douw said, ” the privilege of being commissioned by Taiwan’s acting group to create such a music business on port reminded me of the seventeenth century, The sight of Taiwan’s initial encounter with the Netherlands…